‘Researcher identity’ affects global health research in profound and complex ways. Anthropologists in particular have led the way in portraying the multiple, and sometimes tension-generating, identities that researchers ascribe to themselves, or have ascribed to them, in their places of research. However, the central importance of researcher identity in the ethical conduct of global health research has yet to be fully appreciated. The capacity of researchers to respond effectively to the ethical tensions surrounding their identities is hampered by lack of conceptual clarity, as to the nature and scope of the issues involved. This paper strives to provide some clarification of these ethical tensions by considering researcher identity from the perspective of (1) Guillemin and Heggen’s (2009) key distinction between procedural ethics and ethics in practice, and (2) our own distinction between perceptions of identity that are either symmetrical or asymmetrical, with the potential to shift research relationships toward greater or lesser ethical harmony. Discussion of these concepts is supported with ethnographic examples from relevant literature and from our own (United States (US) Government-funded) research in South Africa. A preliminary set of recommendations is provided in an effort to equip researchers with a greater sense of organization and control over the ethics of researcher identity. The paper concludes that the complex construction of researcher identity needs to be central among the ethical concerns of global health
researchers, and that the conceptual tools discussed in the paper are a useful starting point for better organizing and acting on these ethical concerns.
Leggi articolo:
http://onlinelibrary.wiley.com/doi/10.1111/j.1471-8847.2011.00297.x/full 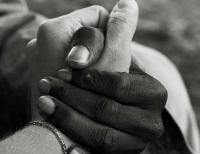